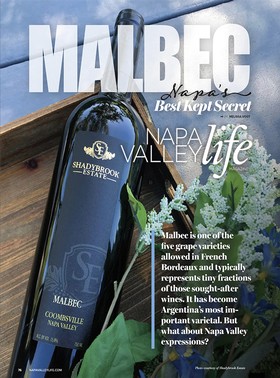 Malbec is one of the five varieties allowed in French Bordeaux and typically represents tiny fractions of those sought-after wines. it has become Argentina's most important varietal. But what about Napa Valley expressions?

... Shadvbrook Estate is another producer who champions the Coombsville terroir as an excellent fit for Malbec. “Our Shadvbrook Estate Coombsville vineyard provides that rocky, nutrient-rich soil with cooler mornings that slow to rise to the hot summer temperatures in Napa Valley. This provides a longer, more balanced ripening in the Malbec fruit," said Kimberly, vice president of sales and marketing at Shadvbrook Estate. Winemaker Rudy Zuidema harnesses the power of their Malbec for a single varietal expression and a blending grape in their iconic Bordeaux blend Estate V. This wine incorporates Malbec in the style of true Bordeaux blends, utilizing all five of the French ordained varieties in its production. “Taking the time and energy to grow a fantastic Malbec adds dimension to your Bordeaux program,” Bothwell stated, and many other local winemakers agree. For Shadybrook’s single varietal 2018 Malbec, there were only 148 cases produced, and they are currently sold out. For those interested, the 2019 Malbec will be released this September...